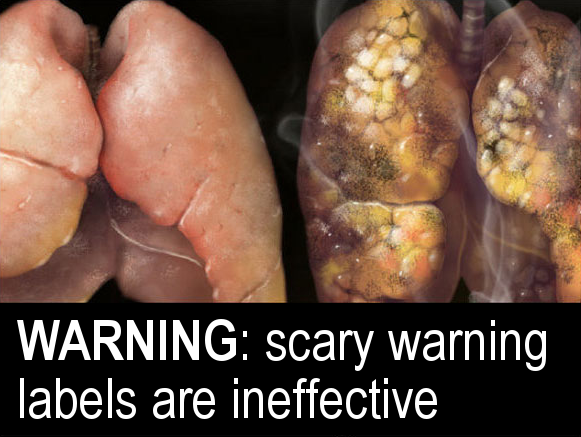 Fear appeals are a commonly used strategy to change behaviour. For instance the threatening and graphic fear-arousing communications now ever-present on tobacco packaging, and in campaigns to promote seatbelt use and discourage substance use. Despite the popularity and widespread use of these fear-arousing methods, research suggests that they may not be the best way to change behaviour, or to raise awareness or educate people.

How is this possible? Shouldn’t people be scared of things that could harm their health?  Surely no one who knows the risks would smoke, drive without a seatbelt, or use methamphetamine, right? Not quite…

The appeal of fear

One reason that scare tactics seem to be the go-to choice for public health campaigns is that people often think that they know how others behave. People think that what prevents them from doing something dangerous, will be the same thing that prevents others from doing that.  “If people only knew the risks…”

Of course, the risks of many unhealthy behaviours are already frequently communicated in the media, through school systems and via social networks.  Did these campaigns not reach the people who are at risk? Or are these messages not confrontational or powerful enough?

The thinking goes that a more confrontational or scarier message should work better to break through people’s defences, confront them with how dangerous these behaviours are, and get them to think twice before trying a cigarette or methamphetamine.  And indeed, when you ask lay people what would work to deter them from doing something unhealthy, this is often one of the most popular answers.

However, we’ve known for a while that this introspection is flawed: people don’t always have access to their reasons for acting as they do. Asking the target population about their reasons for doing (or not doing) a behaviour can be very useful, and involving them in the intervention development process is crucial to success. However, lay people are not experts on behaviour change, and that responsibility shouldn’t be placed on them.

Besides the intuitive attraction of threatening communication, another reason for its popularity is a perceived lack of alternatives. Not all intervention developers and advertising agencies are familiar with intervention development protocols such as Intervention Mapping, or the lists of behaviour change methods that are available.

It is understandable that intervention developers frequently employ fear and threats in their health promotion efforts, as they are easily accessible and are based on ‘common sense.’ But why is this a problem?

Nothing to fear but fear itself

The problem is that humans do not always behave rationally, and evolution did not ‘design’ us for most things we do nowadays. One thing people are generally quite good at is maintaining a positive self-image. And one of the means we employ to do this is distortion of our own perceptions.

While we are all generally interested in information about risks, if the circumstances aren’t right, people may tune out risk-related information. For easy behaviours, this isn’t a problem: If you warn somebody that they shouldn’t eat raw chicken, for example, they will very likely comply. It’s with more difficult behaviours that the problem of self-perception comes into play.

Quitting smoking is notoriously hard: in fact, most smokers want to quit, and when people don’t think they can avoid a threat, their self-image is threatened. It’s not fun to engage in something destructive and be fully, painfully aware of its dangers.  So, people have ways of making themselves less aware. Whenever a person is not confident that they can avert a threat, they will react defensively to preserve their self-image: either by downplaying the risks or by focusing on other positive aspects of their self-image. For example, a smoker might cite their grandmother who has smoked two packs a day for forty years and is still going strong (“Smoking is not so dangerous”); or might explain that they work out five times a week or eat half a kilo of broccoli every day (“I am a healthy person”).  These defensive reactions help people to maintain a positive self-image which allows then to continue engaging in the dangerous behaviour.

These dynamics have been studied for over sixty years. However, the issue is still considered somewhat controversial. To resolve this controversy, our research team critically assessed all research in the area. We researched why on the one hand, some studies found that threatening communication worked, while on the other hand, other studies found (congruent with psychological theories) that they did not work.

In the review of literature, we found that fear appeals only changed behaviour when they were coupled with interventions that successfully increased individuals’ confidence in their ability to eliminate the threat.  In other words, only when people thought they could avert the threat, did it make sense to threaten them.  When people were not confident they could change their behaviour to avoid a threat but were threatened anyway, not only were the fear-arousing messages ineffective, but they sometimes even backfired.

If threatening or confronting people is not the way to effectively change peoples’ behaviour, what is?